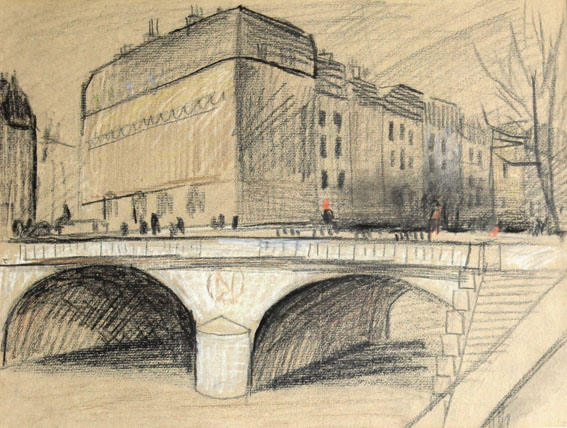 Bridge over the Seine

Christopher Wood (known as 'Kit' to his friends) was born near Liverpool. He studied architecture before turning to painting. In March 1921, at the invitation of the influential collector and patron Alphonse Kahn, Wood joined the artistic exodus to Paris and moved into Kahn's house in the Bois de Boulogne. Kahn also helped Wood acquire a studio in the rue des Saints Peres, adjacent to the left bank of the Seine. He met Picasso and was influenced by modern French art. In 1926 he met Ben Nicholson, becoming close friends and founding the St Ives School. Several books have been written and TV documentaries made about him.
The muted palette in this picture is brought to life by vivid flashes of red and is typical of his work.
Included in the sale is the book, Christopher Wood - "His life and work" by Eric Newton - The Redfern Gallery, London 1959. The Pallant House Gallery in Chichester held an exhibition of his work in 2016, see the YouTube A Curator's Tour - Christopher Wood presented by Katy Norris.